On Saturday, September 16, 2017, Natian Brewing celebrated eight years as a production brewery and also it’s grand opening of the taproom at 1306 E Burnside Street (in the Alexander Building), here in Portland. Tucked into a block filled with a lot of new apartments and cool places, Natian sits right in the B-line of a bunch of up and coming cool places. The taproom features a basic feel – a wide open space, plenty of seating, cool music posters, and as mentioned, rests in walking distance from a lot of fun things to do.

As always, this article could be just like any other article talking about the brewery, the opening, the taplist…blah blah blah…instead, I want you to get to know Ian McGuinness, the brains behind it all:)

An insufferable and unabashed Raiders Fan, Ian originally came from the east cost in Mechanicsburg, Pennsylvania. He eventually moved to New Mexico as well. I had to label him “insufferable” simply because as a Steelers fan, I despise everyone else. Yes, it’s true. Sorry. How he came from PA and likes neither the Steelers nor the Eagles remaines beyond comprehension for me. Ian said that the 1984 Super Bowl did it for him (I was 6) and that ever since then, he’s been a Raiders fan. I guess there’s at least a story behind it…I digress.

The next obvious question I asked was: “Whiz or American?” (referring to the ONLY two ways to have a Philly Cheeseteak – either with Cheez Whiz or with White American Cheese). To wit, he replied: “Neither! It was all Provolone growing up! I had my first Whiz in 1996 in college”. I nearly fell out of my chair. That’s like drinking Bud Light while growing up in Portland. It’s anathema. He recalled his first experience: “I was like ‘what is this hippy dippy bullshit?’ we were hunkered down on the street…the subway was coming up…we were like cave men eating it” Some people…Sigh. By this point in the interview, I was like “this guy and I have zero in common…he’s going to kick me out of here if I don’t keep my mouth shut.”

I then made the mistake of asking what beer he had when he was younger. He delightfully stated: “Colders 29 and Mikwaukee’s Best“,  affectionately known as “The Beast”.  I really don’t need to say anything more about that do I? Although, he did redeem himself when he mentioned Honey Brown.

How did beer come into your life? Beans. Yes. Beans

Ian proudly spoke of his Latino roots and his staple of beans and chili as a kid. According to him, he was the only kid in school in PA who put beans on his eggs for breakfast. After some time back in New Mexico, he pondered:

“What do I eat a lot that I can grow and it can be a cash crop?”

Voila! pinto beans! He decided to grow pinto beans in his backyard for his family so that he could contribute. He stated that he was so proud of it, and then “grandpa comes over and says ‘Mijo, this looks really good, but you’re spending 2 bucks of water on 20 cents of beans”

Ian then proudly stated: “I’ve always been ‘how can I turn a nickel into a dime’ type of guy”. When his grandpa opined, Ian said he was like “Oh Shit!” and ripped everything out of the ground:)

From there, he pondered; “What else do I do a lot? I do drink a lot of beer..” Ian bought a home brew kit and ran with it. His college roommate shared a passion for beer, and when living on campus, they would take turns making bedrooms as fermentation rooms while spending pennies on the dollar and saving money! Crazy huh? It only grew. People could come over and they were brewing 5 times as much a they could drink, and in his own words, he became the after hours on campus connection. 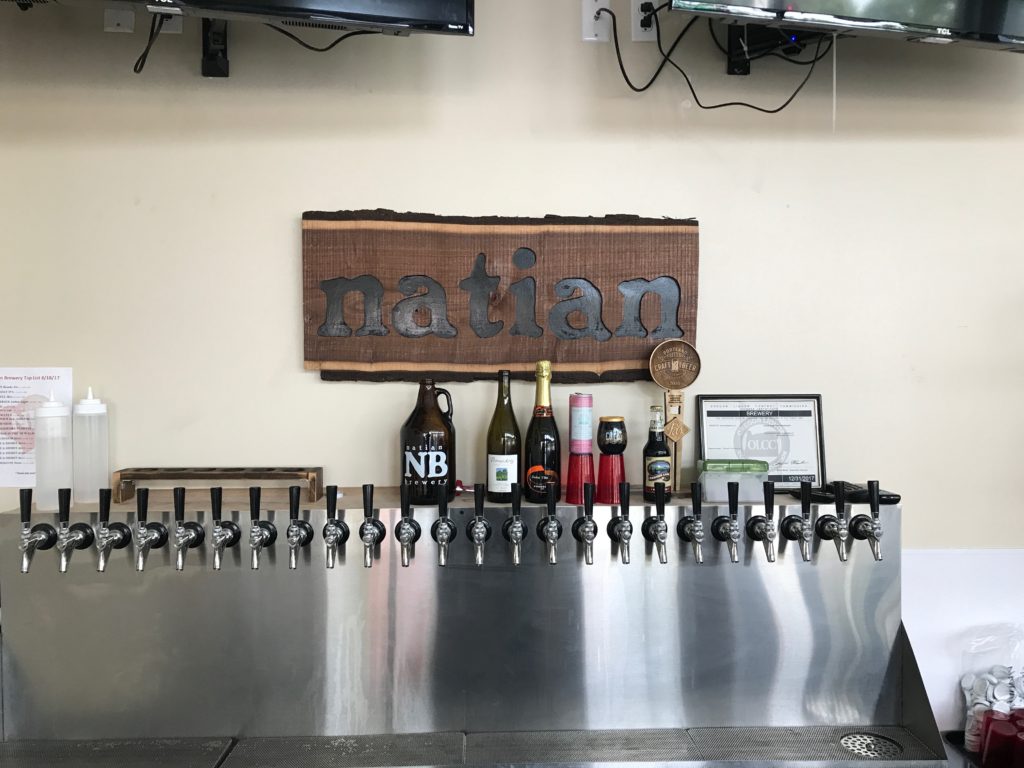 In his own words, “the clock keeps ticking”. Eventually, Natian plans to continue its expansion, and Ian will move the production space out of the Portland Bottling Company. “The idea is to get things going so I can be more experimental and have a bigger fan base…trying to utilize other bars/taproom space doesn’t workout long term. It’s good for the goose and good for the gander to eventually move production.”

That said, Ian doesn’t view “success” in the same way that others do. To him, “I don’t see myself as being a big national…or even a big regional outfit. Nope…I’m the local guy who wants to make a living and hire good cool people so they can have a living too. In many cases, success for a brewery means walking away from all of the things that made it what is was.” In my view, Ian definitely represents a person that the ends don’t justify the means – he cares just as much, if not more, about how he gets from point A to point B. I find that quite admirable.

By way of example, he stated: “I have always tried my best to beat the politically correct marketing bullshit that everyone claims to do but they don’t. I always try to stay local and buy American,..I always try to do what puts craft beer on a pinnacle. I try to stay away from buying anything outside of America…it gets my goat when people say ‘support local’, but then go to a big brewery…all the money is going elsewhere.  I always do my best to walk the walk versus talk the talk, and I hold to those values.”

When I asked him what would he do if money was not an issue:

Without trepidation, he responded, “I’d a professional gardener. I’d grow pinto beans and hops.” He followed that up with: “You need a lot of money to be a poor farmer. Everyone is like: ‘look at the size of your garden…’ (spoken a redneck accent)” I couldn’t help but chuckle at that response. Maybe beans aren’t so bad after all…