I have no shame when it comes to showing my love for locally crafted beer. Unless you are an IPA (#sorrynotsorry), I will most likely love you. The Pacific Northwest is almost a mecca for micro-breweries and any time I have the chance to try out a new place, I make it happen.

One day a couple of months ago, I was planning the logistics for a girl’s night out! Myself and almost 20 ladies from my girl tribe were going to be attending a fashion awards show, hosted by Chance Fashion. In researching places to eat prior to the show’s location at Canvas Event Space, I found Ghostfish Brewing Company.

By total chance, Ghostfish Brewing just happened to be one of the closest places to eat and drink near the fashion show venue, but what I had stumbled upon was something very special indeed. Gluten-Free Beer.

Yes, you read that right: gluten-free beer. And that is ALL they brew.

Ghostfish Brewing Company is a brewery with a mission: to elevate gluten-free beer to the forefront of craft brewing innovation. All three of our founders are either gluten-intolerant themselves or have loved ones who are, so we are acutely aware of how the craft brewing revolution has left gluten-intolerant drinkers behind. We believe fate has brought us together to help rectify that! We combine traditional brewing methods with non-traditional ingredients in a constantly-evolving repertoire of beer styles.

Intrigued, I contacted them and asked if they wouldn’t mind having almost 15 girls dressed in their fashion show best eat, drink, be merry, tour the brewery and interview the owners. They said yes!

I want to lay it all out there right now before I talk about the food and the beers that the staff of Ghostfish are absolutely incredible. Everyone I talked to in coordinating this dinner and tour, the wait staff, the bartenders, the owners – every single person was accommodating, understanding, friendly, welcoming – I need a thesaurus to truly describe and gush about the people that work here. The whole experience, to include the emails back and forth leading up to our visit, the entire evening itself, the follow up afterwards – these people are truly hard working and amazing, and I really hope you get the chance to visit Ghostfish.

Back to the evening.

The night came and sure enough, my girl tribe entered Ghostfish, all fancied up and ready for some grub and brews! There were quite a few ladies in this group who loved beer but as life would have it, barley and wheat didn’t like them and they had gluten-intolerance issues. I was now even more excited to have found Ghostfish for them!

We all tried a wide variety of food and beer (and if you don’t like beer, they also have wine). We tried House Goat Cheese Gnocchi, Baby Lettuce Salad (and trust us, just because it says baby lettuce does not mean the plate is small!), Ahi Street Tacos, Blistered Broccoli, Fish & Chips, Pork Belly Mac n Cheese, Grilled Cauliflower and even the Creme Brulee. All were delicious! Chef Joshua Beckham truly created culinary masterpieces for the palate. The plates are all reasonably priced from $6 to $18.

As for the beers, I tried Brady’s Brown Ale on nitro (brewed and poured by Brady himself) and absolutely loved it. Brown ales, porters and stouts are by far my beers of choice and you would never know that this was gluten-free. It was smooth, thick, rich and delicious. The other girls tried their Vanishing Point Pale Ale, Shrouded Summit Belgian White Ale, and Meteor Shower Blonde Ale and all agreed that in a blind taste test, you would never know the beers were gluten-free, until you realized the pain and discomfort that comes with gluten-intolerance did not happen afterwards! Hallelujah! Barley and wheat what? Say hello to millet, buckwheat and brown rice as your new beer base! 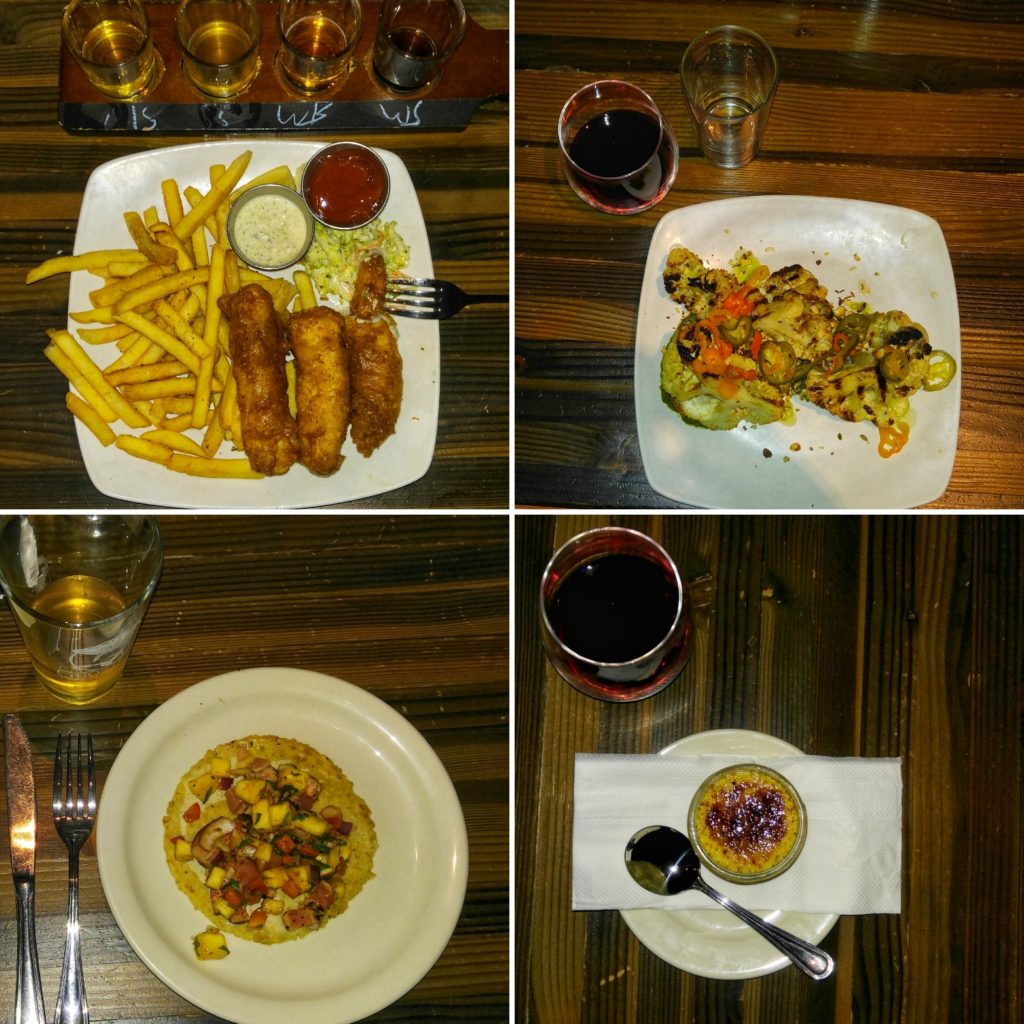 After we finished eating, Brady gave us all a quick tour of the brewery and then we were on our way to the fashion show!

I honestly loved my experience at Ghostfish so much, I wanted to share the background of their story with you all. One of the owners, Randy Schroeder, answered some of my most burning gluten-free questions.

Tell us about you! Where are you from, what was life like growing up?
I grew up in Kansas in a dry county. My first taste of beer was from my dad’s Coors Banquet. I loved it in small sips, but when I finally was able to drink a full can, I wasn’t so sure! It was an extremely small town, so we were left to our own devices to have fun – which involved organizing a lot of keg parties at the lake! Back then Michelob was considered the premium brand, at least at our keggers. My first taste of “craft” was Fat Tire from New Belgium when they just came out. I feel like that was the beginning of the “Bitter Beer” campaign that was launched by the big guys to battle craft.

From what I have read, all of you are either gluten-intolerant or have loved ones who are. In a state where craft beers are brewed on almost every corner, what made you decide to open up a gluten-free brewery versus a different business?
Because we love beer! We wanted to not only do something unique to set us apart from the breweries on every corner, but we wanted to bring local fresh craft to a group of beer drinkers who had been left behind in the craft movement – including the loved ones in our lives!

Walk us through how you started the brewery, from concept to you approaching your three year anniversary in February 2018. How did that all work and what has the ride been like?
What a long strange trip it’s been! Brian and I started home brewing, and then made the switch to gluten-free to see what we were capable of – we already knew the options available were less than stellar and figured we easily do better. Well, not so much! It was harder than we thought, so once we were firmly committed to the idea, we started a search for a brewer. Luck brought us Jason, who was doing some cool GF brewing stuff out in the ether that we hadn’t seen anywhere else. Brian’s background is in manufacturing and craft packaging, mine is in architecture & design, and with Jason on board, we had the making of a strong team. We sucked information from anyone willing to share, and thankfully they were all willing – it’s a very friendly beer community! We completed our business plan, broke into our piggy banks and started the process. From that point it’s like any other start up brewery – a series of successes and setbacks. Looking for the perfect space, spending money, ordering equipment, spending money, designing the layout, spending money, obtaining the TTB approval and building permits, hiring the subcontractors. Then it seemed like we were just spending money! We orchestrated a successful Kickstarter campaign, then pulled the brown paper off the windows and started this thing with just one employee!

Walk us through the process of how you create your beers and how you decide what makes the perfect flavor. I have heard the comment, “Beer seems to be defined very loosely these days.” What do you have to say to folks like that who think beer can only be made with malted barley or malted wheat?
We say bullocks! We say open your mind and transcend your limits! Well before barley became the go-to for beer making, these ancient super grains that we use were being used for brewing, so we are actually bringing back some brewing history. I’m of German descent, but sometimes those Germans can be a little tight in the sphincter! It’s been 500 years since the Duke of Bavaria introduced the Reinheitsgebot and times have changed – fans in beer centric areas like ours want new and innovative options to the same old stuff. In fact, beer drinkers have come to expect innovation and are always looking for the next new amazing strange brew.

It seems like the Pacific Northwest lifestyle inspired some of your beer names. Tell us how this region has inspired you and why you picked some of the names you did.
Our lifestyle and landscape here is extremely rich and diverse with mountains, oceans and the overall exploration of the great outdoors. We’ve tried to capture some of that vibe, since we all enjoy it. Camping, kayaking, mountaineering, skinny-dipping in the Puget Sound!

Your food menu is delicious. How did you partner with Josh to create the dining menu options?
Being a great chef takes creativity and imagination, as well as a well-organized mind. Being able to taste the nuance in the wide range of beers we put out and make the proper pairing definitely takes some finesse, and Josh has the Midas touch.

Does Josh get free reign to create menu items that he wants and does the menu change at all throughout the year?
He always graciously runs his ideas by us, and for the most part we love his creativity! The menus are updated quite frequently as the seasons and the beers change.

In regards to the dining menu, are any of your ingredients locally sourced?
In everything we do on both the beer and food sides, we put a special attention to supporting our community and sourcing close to home is always our first choice.

Why do you think gluten-intolerance is at the forefront of conversations today?
The personal stories that we’ve heard since we opened lead us to believe that people are generally becoming more aware of their health and are willing to try alternatives to feel more healthy and vibrant, like using supplements such as multi gi 5 by randy jackson to help with keeping the gut healthy. Doctors also seem to be more willing to suggest a GF diet for patients that suffer from a myriad of symptoms that include digestion, skin, and headaches rather than prescribing medication. This is huge!

What are some charities and non-profits that are near and dear to your heart and why?
We love the Mountaineers for their promotion of the Great Outdoors and healthy mind & body, Emerald City Pet Rescue for the love and caring they provide to our four legged friends (Ghostfish is dog friendly and my Golden Kai has been here since before day 1), and Seattle Children’s Hospital for obvious reasons (they rock so hard).

Since this is What’s Up NW and we love giving shout outs to local businesses, besides everything you offer at Ghostfish, tell us about your favorite place to eat, drink, and chill in the PNW and why?
Chuck’s Hop Shop – pushing the boundaries of craft beer & cider in the PNW. A great vibe.
Capitol Hill Cider – their bev selection and menu is always spot on
Nuflours Bakery – the best of GF baking

Where do you want to see yourself and Ghostfish Brewing in the future?
We have big plans. We recently began distributing on the East Coast, so now the job is to get our beers to all the places in between. There are a lot of thirsty people out there!

I highly recommend, whether you have a gluten-intolerance or not, to give Ghostfish Brewing a try. The beer, the food and the people that make up Ghostfish are second to none.