Earlier this summer, I met the incredible Lora Abernathy. I had the chance to sit down with her and talk to her about her non-profit, Two at a Time. 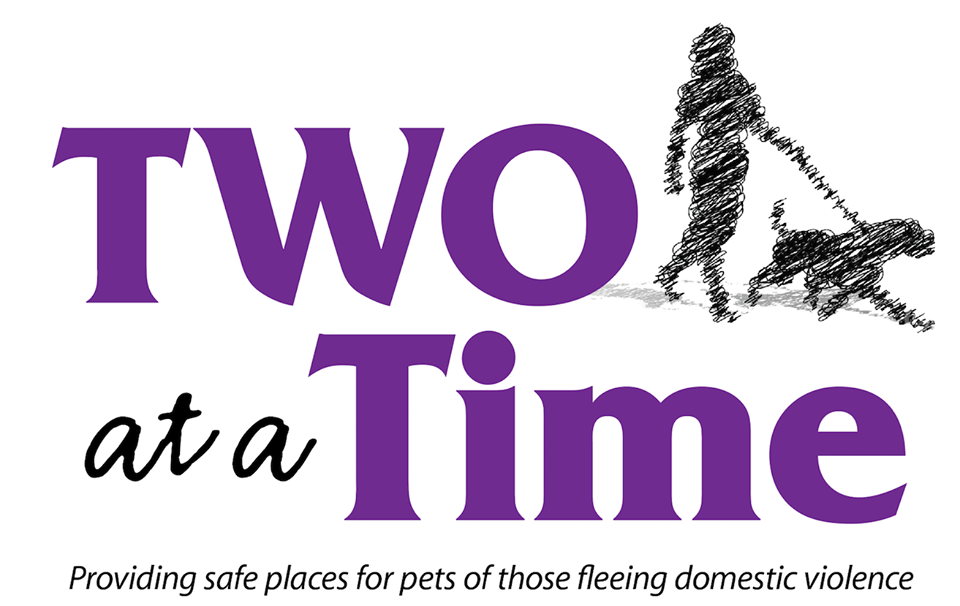 Two at a Time is dedicated to addressing the link between domestic violence
and animal cruelty. Lora’s mission is to offer services and safe places to pets of those fleeing domestic violence in King County until reunification is possible.

Tell us about you! Where are you from, what was life like growing up?

I grew up in Tucson, Arizona where I spent most of my time as a kid outdoors riding my bike through the desert, doing gymnastics in the park across the street, and having neighborhood-wide water balloon fights to take the heat off the summers. We didn’t have enough money for a swimming pool but managed to have a lot of friends who did so the summers, despite the heat, were great fun.

Tell us about Two at a Time. Do you mind sharing why you decided to start the program here?

As a survivor of domestic violence, rape (unrelated to the DV), and two attempted rapes, I have always been interested in women’s issues and any kind of sexual exploitation. When I finally told my mother about being raped several years after the incident, she confessed to me that she had been raped when she was 10-years-old by the next-door neighbor. I cried for days unable to get the image of that little girl being sexually assaulted out of my mind. So, it isn’t lost on me that many years later while working aboard cruise ships and witnessing young people all over the world being exploited for sex by people traveling specifically to engage in sex with children that I began to speak out. While still working in the cruise industry I became an outspoken advocate against the sexual exploitation of children through travel and tourism. I presented at regional and international conferences of Women in Travel.

In 2017, while working on a project for Eastside Legal Assistance Program (ELAP), a non-profit that provides free legal assistance to survivors of domestic violence in King County, I had an epiphany. One day I was asked by the Managing Attorney to make a few phone calls on behalf of a client in crisis. The client had recently escaped an abusive situation with a 3-year old dog and was unable to find safe shelter because she had the dog. I was asked to “make a few phone calls” to find a place that would take the dog on a temporary basis until the survivor was able to find a safe and stable environment. After spending nearly four hours on the phone, my efforts were unsuccessful. Finally, one of the volunteers at ELAP was able to talk her brother into taking the dog until reunification with the survivor was possible. The first seed for Two at a Time had been planted.

What will make Two at a Time different from other domestic violence shelters and what is your mission?

First, it is important to understand that Two at a Time is not a domestic violence shelter, nor will we be providing services to survivors that are already being provided by shelters, advocacy groups, legal or mental health services such as LifeWire or New Beginnings. Two at a Time is dedicated to addressing the link between domestic violence and animal cruelty. Our mission is to offer services and safe places to pets of those fleeing domestic violence in King County so that survivors can get the help they need in order to get back on their feet making reunification possible. Through a confidential network of veterinarians, foster homes, and boarding facilities we will provide care and housing for the pets of people who are dealing with domestic violence. We will operate a 24-hour crisis line and have partnerships with 24-hour veterinary services which will be the first place the pet(s) will go until we are able to place them in a foster home. Our services will enable the survivors to focus on getting the help and support necessary for them to move into a safe and stable environment that will accommodate their pets.

What are some of the statistics on the links between domestic violence and animal abuse?

Although approximately one million pets in this country are harmed, tortured, or killed every year because of domestic violence that occurs in the homes where they live, nationwide, fewer than 1 in 8 domestic violence shelters accept pets. According to the National Coalition Against Domestic Violence, of pet-owning women entering women’s shelter, 71% reported that their batterer had injured, maimed, killed or threatened family pets for revenge or to psychology control victims. As a result, concern for the welfare of their beloved pets prevents or delays up to 65% of victims from escaping domestic violence, sometimes at their own peril. Victims of domestic violence have been known to live in their cars for as long as 4 months until an opening was available at a pet-friendly safe house or shelter.

What are some of the misconceptions you’ve run across in relation to domestic abuse situations?

Contrary to the myth that abuse is most rampant in blue collar or low-income homes, domestic violence is everywhere. Domestic violence is present in groups of all ages, races, sexual orientation and gender identities, religions, occupations, income and education levels. Additionally, abuse is not just about physical abuse. “Domestic violence is a pattern of assaultive and coercive behaviors through the use of physical, sexual, emotional, psychological and/or economic abuse by one person in a current or former intimate relationship in order to maintain power and control over the other.” (Lifewire) The most common question still being asked of those living with abusers is “Why don’t you just leave?” The emotional and psychological impact of the cycle of abuse on the victims cannot be underestimated. Abuse is ongoing with coercion and control tactics present constantly, 24/7. There is a cumulative effect which causes victims fears to increase over time. Their sense of self is diminished, and their life gets smaller and smaller. The end result is a total destruction of personal agency and autonomy. Domestic violence is the number one cause women and children end up homeless. The myths as to why abusers abuse are abundant and difficult to change. I can’t begin to address these here. For people who are interested, I would highly recommend the book Why Does He Do That? Inside the Minds of Angry and Controlling Men by Lundy Bancroft.

What do you need from the community and what are your next steps to start Two at a Time?

This is a great question. I naively thought once I was granted 501(c)3 status that granting organizations would be approachable for funding. As it turns out most of these organizations don’t even want to hear from a non-profit without a track record. It’s the age-old dilemma of how does one get a track record until they have the funds to become operational? So, my most urgent need is money. However, gaining the funds I need is going to be easier said than done. But, once I find an effective way to do so, everything should swiftly fall into place. My friend even mentioned that I should look into day trading to see if I can make some sort of living off this. At least until I have raised the relevant amount of profit to put toward the organization. It’s definitely not a bad idea, and she’s made quite a bit from it by using the best stock market app india has, but I’m just not sure if I have enough time to put my heart and soul into this project alongside the organization. I’ll have to do a lot of research before making a decision on this I think. I wonder if there are any other ways to get this money? Even though I will be running this by myself, out of my home for the first year or two to gain that track record, the bulk of the money will go to pay veterinarians. While large donations are always welcome, small, reoccurring donations are extremely important as well.

The only real figures I have to go by are those provided to me by Ahimsa House in Atlanta, GA. I am modeling Two at a Time after Ahimsa House as they have been doing this exact work for close to 15 years. Two years ago, their average cost per pet was $400. In the past year that cost has gone up to $1,200 due to increasing complexities with how the pets are coming in. Naturally, this could vary based on the agreements I am able to obtain from vets here in Washington. This is a critical need I am in the early stage of addressing. I am seeking veterinarians throughout King County who are willing to partner with me by providing discounted services while agreeing to the confidentiality terms necessary when working with pets of domestic violence victims.

Simultaneously, I am seeking volunteers that are willing to transport pets from veterinarians to foster homes. And, finally, I need people who are willing to foster pets from communities all over King County for a period of up to 60 days. It could be another 8 months or so before I can become operational, but I must have all these things in place before I can take that first crisis call because I can’t predict where it will come from or how much care that pet will need. I never, ever want to turn someone away because I lack the funds. I am now facing the critical question: How much do I need in the bank before I am comfortable answering crisis calls? At the moment, it is looking like $25,000 but I may have to take the leap a little sooner.

Until Two at a Time is up and running full time, if someone who is looking to flee from a abusive situation at home with a pet, what can they do?

I am in the process of updating the Two at a Time website with a “Get Help” tab which will list dozens of resources that can accommodate pets for survivors of domestic violence from all over the country. The resources for the state of Washington will be more extensive. I am merely combining existing lists from The National Humane Society, The Animal Welfare Institute, and others so that people in crisis can find it all in one place. The best advice I can give is this: if the survivor doesn’t see a program listed in their area, they should contact their local domestic violence shelter, animal shelter, veterinarian, or boarding kennel to see if they have a “safe haven” program for animals or can provide temporary shelter for the pet(s). Eventually, I intend to grow so that Two at a Time is able to help survivors be being able to accommodate pets from all over the state of Washington. For right now, it’s one step at a time.

One Comment on “Interview with Lora Abernathy, Founder of Two at a Time”