If you are a Seattleite, you might do your best to avoid going to the tourist trap that is the Seattle waterfront – unless of course, you have family or friends visiting. It really is a beautiful place to visit, filled with history and everything that is iconic Seattle.

I only moved here in 2012 from the east coast and I find myself still constantly exploring this amazing city. I recently had the chance to visit The Fisherman’s Restaurant & Bar at Miner’s Landing at Pier 57 and try out the menu. I wasn’t really sure what to expect as I had never been there before but I was excited to check it out. I was also here to interview the restaurant’s new Director of Culinary Operations, Nick Novello. With my friend, Mishana with me, we sampled everything on their special Valentine’s Day menu and chatted with Chef Nick for much of the night. The entire experience – from the service to the food to the atmosphere – was top notch and I left with a food baby in my belly and ready to come back to the restaurant again and again. Keep reading to find out why I am so excited for what the future holds for The Fisherman’s Restaurant & Bar!

First, Miner’s Landing is basically where the city of Seattle began. In 1897, a steamship brought down the first load of gold from the Klondike during the Gold Rush and docked where Miner’s Landing now stands. This ship, the SS Portland, carried more than one ton of gold to Seattle, sweeping the sleepy city into gold fever. Pictures from Seattle’s early days during the Gold Rush reside throughout Miner’s Landing, and upon entering Fisherman’s, you almost feel like you are taken back in time. The old, rustic wood paneling and rich atmosphere surrounds you as you eat and take in the panoramic views of Elliott Bay. One can only imagine what a sight it was for gold miner’s to see upon disembarking their ship after the long journey from Alaska.

The wait staff at Fisherman’s treat all of their customers like royalty. I quietly observed how much fun they all had interacting with patrons, making them laugh, serving them exactly what they wanted in a timely fashion and making it a very welcoming place to dine.  Mishana and I were well taken care of by the restaurant’s manager, our waiters and of course, by Chef Nick.

Chef Nick Novello only just began his time with Fisherman’s almost three months ago. He is the Director of Culinary Operations not just at Fisherman’s but at The Crab Pot and Enzo’s Bistro & Bar as well. The Southern California-native has come full circle in life. His father was the Director of Operations at the Crab Pot and Fisherman’s in San Clemente, California, and now Chef Nick is doing the same as his father in Seattle. I am also pretty sure that cooking is in Nick’s blood as even his uncle was an executive chef for Hilton!

Chef Nick truly believes in local and sustainable sourcing for all of the food you will find on your plate at Fisherman’s. Supporting local farmers, producers and distributors is a win-win for everyone. He got his first real start in Port Skagway, Alaska and learned the value of what quality seafood meant. All of his experience and love for what he does comes through on all of the plates he brought to our table. They were pieces of art and filled with explosions of flavor at every turn on the palate. Every single entree was delectable and savory, seasoned in the most creative ways. Watching and listening Chef Nick describe each plate was the equivalent to having Shakespeare read his plays aloud to you. His enthusiasm and passion for his craft were evident and it truly translated with each meal.

We started off our meal with some incredibly tasty appetizers. The Fresh Shucked Oysters made with Grapefruit Mignonette, Mustard Caviar and Grilled Lime were sweet and creamy with the grapefruit mignonette acting as the perfect accompaniment to the slightly briny taste that oysters can bring. The Goat Cheese Beet Tartine is made with crispy Pumpernickel toast, beet goat cheese, parsnip puree, roasted beet, pickled beet and chervil.  This elegantly plated dish was not only playful on the eyes but combined the earthiness of the beets with the tanginess of the goat cheese in a way that danced on your taste buds. The two stars of the show for both Mishana and I were the oyster shooters and the Fisherman’s Classic House-Made Sourdough New England Clam Chowder Bread Bowl. One of the oyster shooters was made with Frank’s RedHot and tasted EXACTLY like a Bloody Mary, leaving Mishana and I with wanting another shot!

Then, there was that Sourdough bread bowl. Mishana has a gluten-intolerance (she still eats bread sometimes and this time it was #worthit) and I have just been avoiding carbs because I am in the process of training for a marathon. The bread bowl is small enough to not make you feel too guilty about eating it. It was literally, and I’m not exaggerating – the best sourdough bread either of us have ever had. The clam chowder made you feel warm and cozy and that bread – can you say heaven? Keto diet be damned – Hal Griffith brought the yeast starter for this house-made bread down from Alaska and it’s over 100 years old. You are basically savoring history with each bite.

If the appetizers weren’t enough, it was time to taste test the entrees. 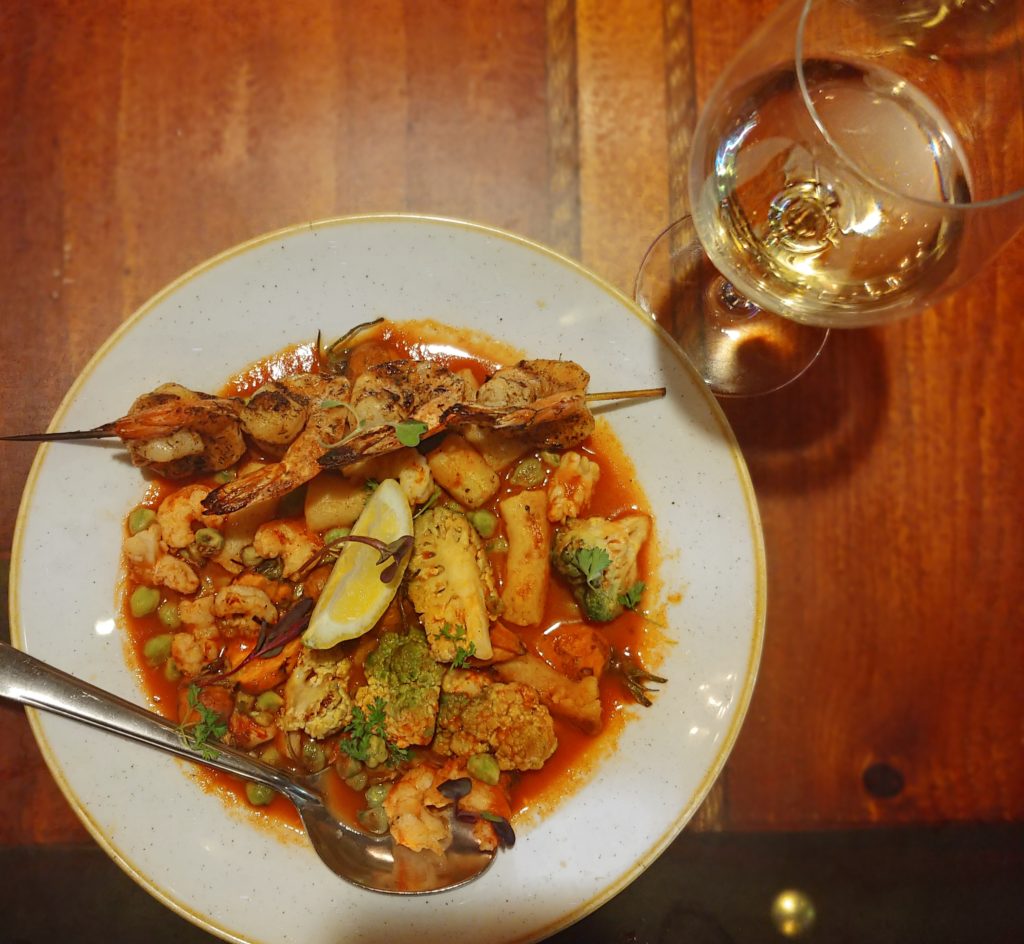 The Braised Tomato Shrimp Brodo and Ricotta Dumplings are made with shrimp broth, young garbanzo beans, Argentina shrimp, Thumbelina carrots, Romanesco, and a grilled shrimp skewer. The tomato flavors and spiciness added to the tangy aroma of the dish. I loved the shrimp and the ricotta dumplings added a nice creamy texture. 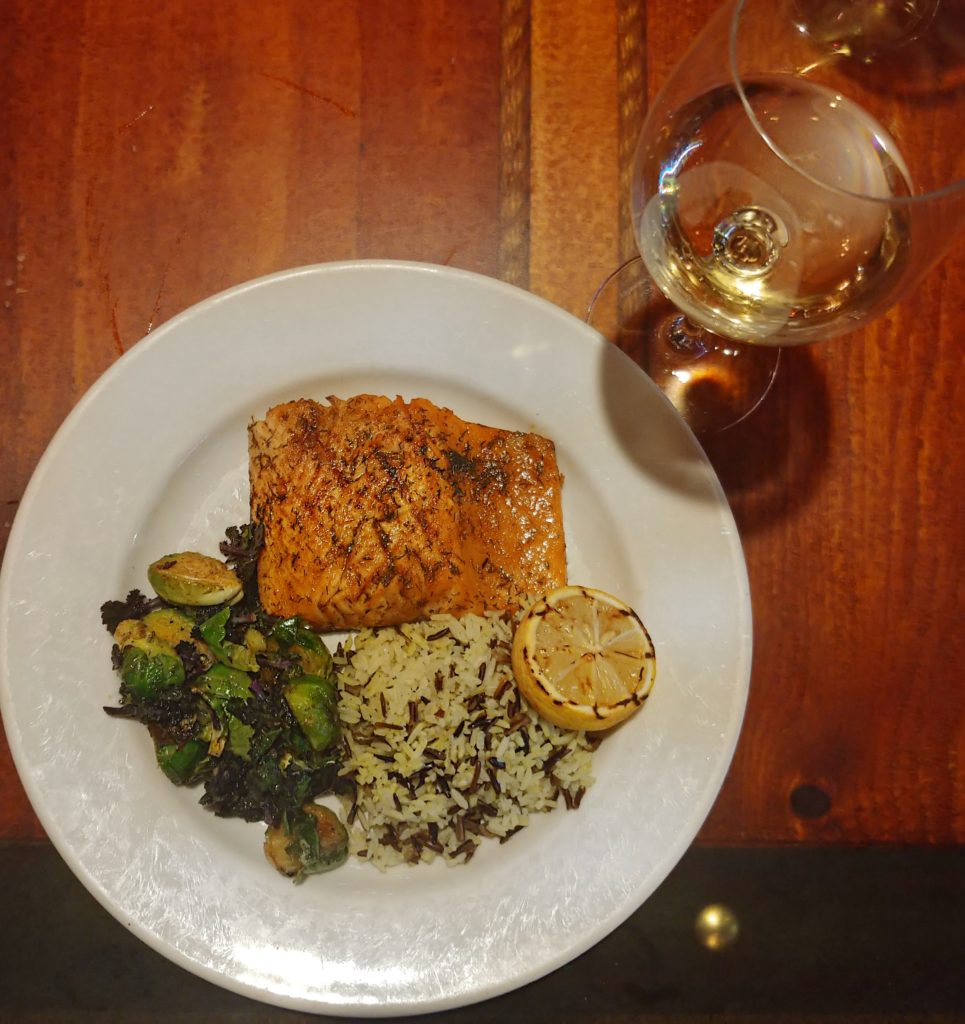 The Classically Grilled Steelhead is grilled medium rare, lightly brushed with butter and lemon and is served with wild rice pilaf and chef vegetables. The salmon is cooked in the skin and tasted like butter as it practically melted in our mouths. The brussel sprouts were seasoned to perfection, adding the perfect combination of sweet and salty to the dish. 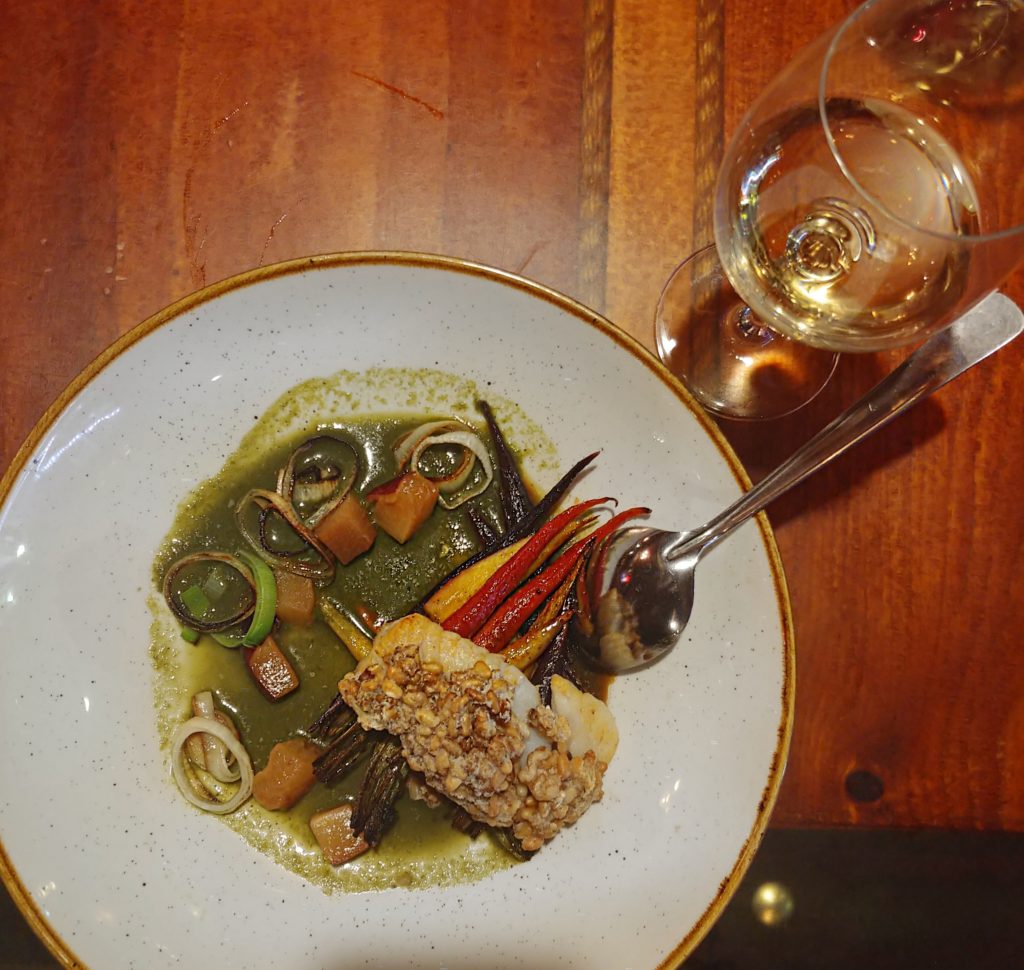 Saving the most fun for last, the Pinenut and Walnut Crusted Pacific Cod is made with sorrel puree, black pepper honey, heirloom carrots, caramelized leek, pickled plum and crispy leeks. Chef Nick was really excited about sorrel and after tasting it, I could see why! I had never heard of it before nor had I ever tasted it. Sorrel looks like a dandelion but adds a tangy acidic flavor to dishes! Dipping the cod and the vegetables into the sorrel puree was a whole new type of tasty, colorful heaven!

After gorging ourselves on all the food, Chef Nick brought out the desserts for us to sample. This is where a little tear wells up in our eyes. Prior to us going to Fisherman’s, I had let the staff know that Mishana was allergic to eggs and soy – which is one of the most unfortunate allergies to have as those two ingredients are in practically everything. Mishana had prepared herself to not indulge in the decadent dessert offerings, and I was hoping for at least small portion sizes so I wouldn’t go into a complete food coma later. We were unaware that Chef Nick had prepared a special dessert for Mishana ahead of time. 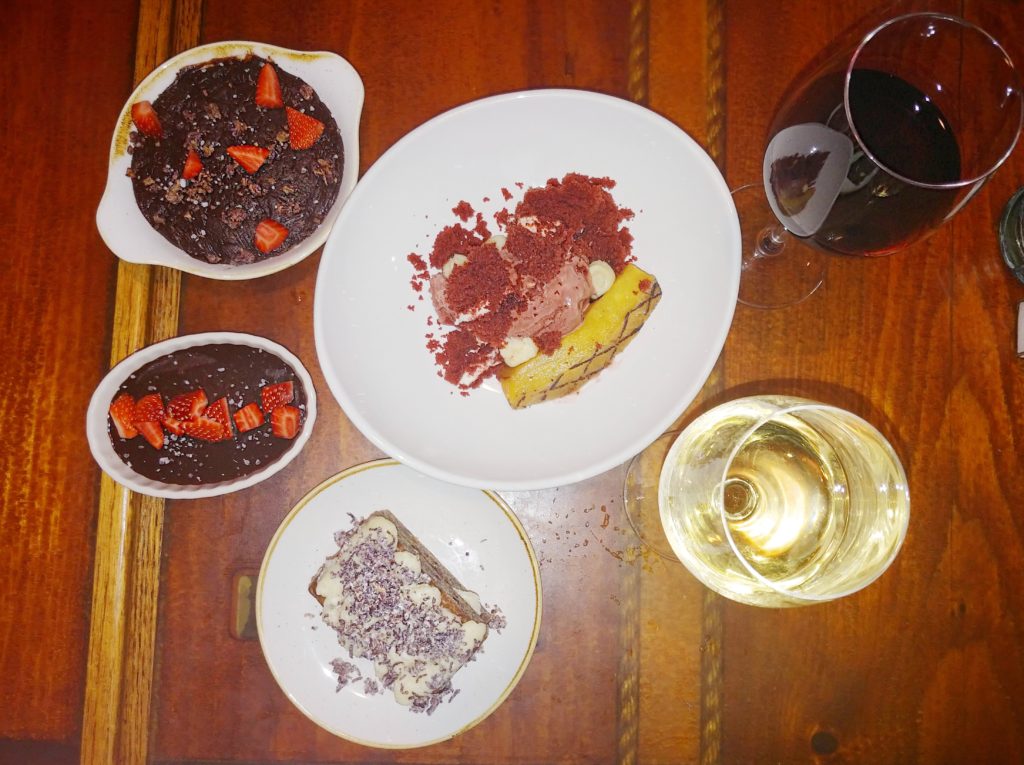 The desserts included a Vanilla Braised Pineapple with house-made red velvet ice cream and red velvet crumble, Purple Carrot Cake topped with vanilla bean cream and cream cheese frosting and Chocolate Pot’de Creme, dark chocolate ganache with cold strawberry compote. As you can see from the photo, there is a second chocolate dessert at the top left corner – Mishana’s specially made treat. Chef Nick had whipped chocolate with air at 108 degrees, wrapped it and put it in the refrigerator to cool.  This was the first time he had made this and he eagerly watched Mishana dip her spoon into the mixture. She absolutely loved it and he had to try it himself to taste his creation. It was one of the sweetest gestures either of us had seen in such a long time – and made Chef Nick number one in our books! The desserts I sampled were of course luxurious, rich, velvety and absolutely delicious.

I highly recommend any Seattleite brave the waterfront and try out everything that Chef Nick has been working on. He is truly the master craftsman when it comes to food, and his creations need to be tasted by everyone. Fisherman’s also makes for the perfect date night, especially if you live in West Seattle! You can come on the West Seattle ferry as it docks right by Miner’s Landing, nosh on some amazing food and then take a spin on the Seattle Great Wheel or Wings Over Washington afterwards!

Disclosure: I was not financially compensated for this post. I received comped meals and beverages for review purposes. The opinions are completely my own based on my experience.