Gluten-free. Gluten-intolerance. You hear those phrases all the time now. Restaurants have added gluten-free options to their menus. Stores market it. There are memes. Some people make fun of the term and those that claim to have it. However, if you have Celiac’s Disease or your body cannot handle digesting gluten – you have experienced first hand the reality that comes with the gluten protein found in grains. Trust me, you will appreciate that cauliflower pizza crust if you experience all of these symptoms after eating a regular pizza.

This all leads me to the story of my chance encounter with Erin and Robyn.  The tale began with a Lyft driver who gave me a business card one night as I was on my way to a beer tasting event.  If your body can’t handle gluten – trust me, you want to read this until the end, and then you’ll want to mark your calendar and open up Google Maps. And if your gut can handle it – get ready for your new favorite brewery.

In the fall of last year, I was on my way to a beer tasting event. I am quite the connoisseur of the malty beverage, especially porters and stouts (if you’ve been a What’s Up NW reader for awhile, you are fully aware of this fact already). I also love talking to people anywhere I go, and when my Lyft driver picked me up from my place in West Seattle to take me into the city for the event, we were chatting about all the microbreweries in the greater Seattle area and how there are so many to choose from. He ended up giving me a business card for a new brewery that was going to be opening up in West Seattle and it happened to be owned by two women. As a proponent for celebrating girl power (especially in the beer industry), the next day, I went onto the website for this brewery and immediately knew I had to share their story.

I sent an email to Cold Crash Brewing and told them I’d love to feature them! Erin and Robyn, the women behind the brewery, got back to me quickly but they were in the process of getting everything they needed established before opening and they would prefer to wait awhile before meeting with me. I put the email exchange aside, a few months went by and then we were back in business – with a grand opening date.

On the first beautiful Sunday afternoon of 2020 (or so it seemed, as we had just had over a foot of rain in the past 30 days), I dragged my skeptical boyfriend, Kyle, with me to the interview. Why was this beer drinking guy so skeptical? Cold Crash Brewing only serves gluten-free beer. And with many gluten-free products not tasting so great (does “this tastes like cardboard” ring a bell?), I imagine anyone would be skeptical. But that was all about to change.

Cold Crash Brewing is located in West Seattle at 4507 48th Ave SW. When you first pull up to Erin and Robyn’s house, you might wonder where the heck the brewery is exactly. Fear not, park your car (or if you are a West Seattleite like me, maybe you just walk over from your house) and walk around from 48th to SW Oregon Street and then you’ll find an alley. During business hours signage will point the way! Cold Crash Brewing at The Alley is where you will find the small brewery and tasting room. The 600 sq ft brewery with a large patio behind their home is truly the perfect West Seattle spot for a neighborhood brewery. The patio area will be dog-friendly, and I cannot wait to walk my two boxers over in the summertime to grab a beer to enjoy the sunshine and a brew on the patio.

When you meet Erin and Robyn, you will be struck by their love and support for one another. They both met at work (8th floor at Starbucks headquarters) years ago and their story reminds you of all that is good in the world. When you order your beer from their tasting room, look at the pictures on the walls of the two of them from their wedding and then watch how much these two women support each other’s dreams – I can’t tell you how amazing and inspiring they were.

Erin is the brewmaster and business operations manager, while Robyn is the engineer, social media marketer, and brand manager of the brewery. Erin found out she had Celiac’s Disease while she was in pastry school in Colorado – can you imagine that? She learned the basic process of what it takes to make beer while attending pastry school. Robyn went to school to learn about ethanol-production and her engineering mindset led her to learning about building design with labor vs ease vs functionality while she was at Starbucks (which she took into account to streamline the brewery and tasting room operations). Between Erin’s diagnosis, the educational background of both women and their chance meeting in the office – Cold Crash Brewing was born.

Cold Crash Brewing is the 14th dedicated gluten-free brewery in the United States and the second in Washington (Ghostfish is the other, you can read more about them here). And can I reiterate again it’s women-owned? Thank you.

What’s behind the name?

If you brew your own beer (I don’t, so I learned something new), then you understand where the term cold crash comes from. Cold crashing is the process of lowering the temperature of your beer before packaging (kegging, bottling, canning) which gives the beer a cleaner and crisper finish.

Since the name cold crash can conjure up images of waves crashing, it only seemed natural for Erin and Robyn to create their wave logo and beers with names reminiscent of a day at the beach. With chill vibes and a sustainable business – why not have the feelings you are sitting on a warm beach enjoying a cold brew? And speaking of chill with those sustainable vibes, Cold Crash Brewing has no plastic in their facility (minus the tubes and piping for the chemicals). Everything they use is designed to be compostable or recyclable. They even donate the spent grain to local farms that feed goats! Drink a beer, feed a goat!

What does it take to run a gluten-free business?

The gluten-free business world is some serious stuff, and both Kyle and I had a crash course (pun intended?) in what it takes to be dedicated gluten-free. When you are gluten-intolerant or have Celiac’s Disease, your body is unable to handle anything gluten has touched. For example, if barley made its way through a pipe that you then used to brew your gluten-free beer, best of luck to your gut health.

I had an idea for why there seemed to be a sudden prominence in a gluten-free world and asked both Erin and Robyn about it. While the debate rages regarding genetically-modified food, the short and simple story is that the growth cycle of wheat has been shortened from weeks to days, and some human bodies are unable to tolerate this change.

However, the gluten-free industry is an incredibly supportive and tight-knit community. To be gluten-free, you need very specific, customized equipment and recipes – and the entire community is there to help one another. Both Erin and Robyn spoke very highly of other gluten-free businesses like Bierly Brewing, Ground Breaker Brewing, and Ghostfish Brewing, who want nothing more than to help those living with Celiac’s or gluten-intolerance. Everyone benefits when working together, and it was clear this was the case in the gluten-free community. 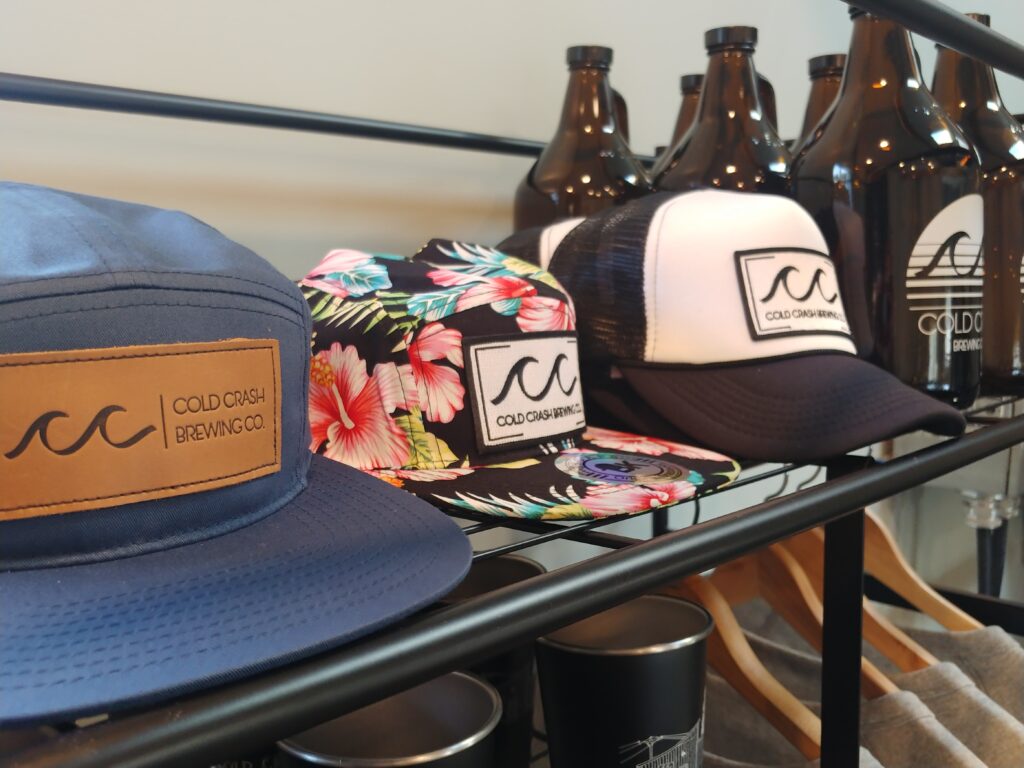 And now, no doubt what you have truly been waiting for – is the beer good?

Kyle and I had a chance to taste test all that was on their beer menu while getting an education on the differences of brewing with buckwheat, millet and rice instead of barley.

The beers on tap we tried were their flagship beer, Tropical Sunset IPA, limited releases Wipeout Pale Ale, Blue Crush Belgian White, Hop Drop IPA and Bonfire Cherry Ale. We also tried their partnership limited release with Brownrigg Hard Cider, the High-five Cyser, and the Dry Cider. While Kyle was skeptical about how gluten-free beers in general would taste, I was not too excited about trying their IPA’s. Kyle loves IPA’s and I pretty much never order them (I always prefer ambers, porters and stouts) – so between both Kyle and I, our tastes run the gamut.

I can honestly say after sampling all Erin and Robyn offered – Kyle may have come in skeptical, but he left sold on gluten-free beer.  And I would actually order any of their IPA’s again! Every single beer was so good. Smooth, refreshing, not too hoppy, not too tart – they each had their own distinct flavor and were full bodied. I loved the Belgian White (ordered a whole glass of it) but as someone who also stays away from anything that tastes like cherry (except Rainier cherries – I could eat those every day), I even enjoyed the Bonfire Cherry Ale. 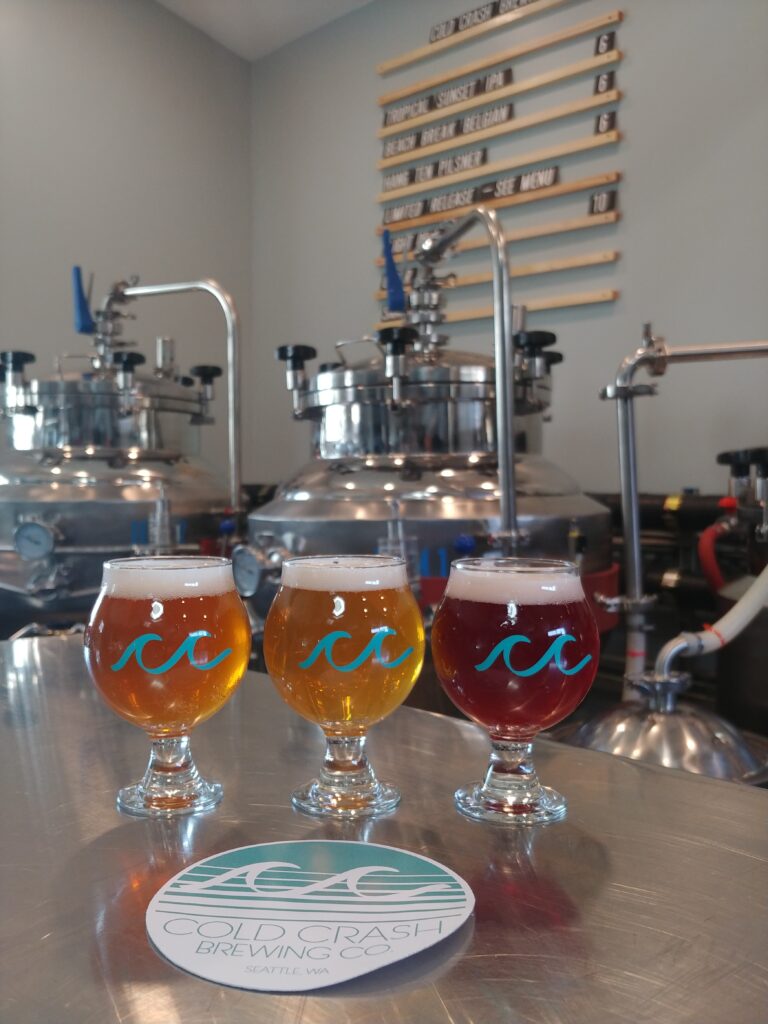 Start paying attention to how your body reacts after you drink regular beer. How do you feel (and I’m not talking about drunk). How does your gut feel? Do you feel congested at all? Bloated? Headache? Brain fog? Joint pain? Fatigue? You just might have a sensitivity to gluten if you feel any of those symptoms after drinking regular beer. You never know!

While Cold Crash Brewing will not have food, they will offer gluten-free snacks for sale and as I had mentioned earlier, you can bring your dogs to the brewery, they just have to stay outside on the patio.

Cold Crash Brewing opens its doors to the public this Sunday, February 16 and they will be open on Saturdays and Sundays from 12 p.m. to 5 p.m. West Seattle, I can’t wait to see you there!