Alright beach goers, here me out. 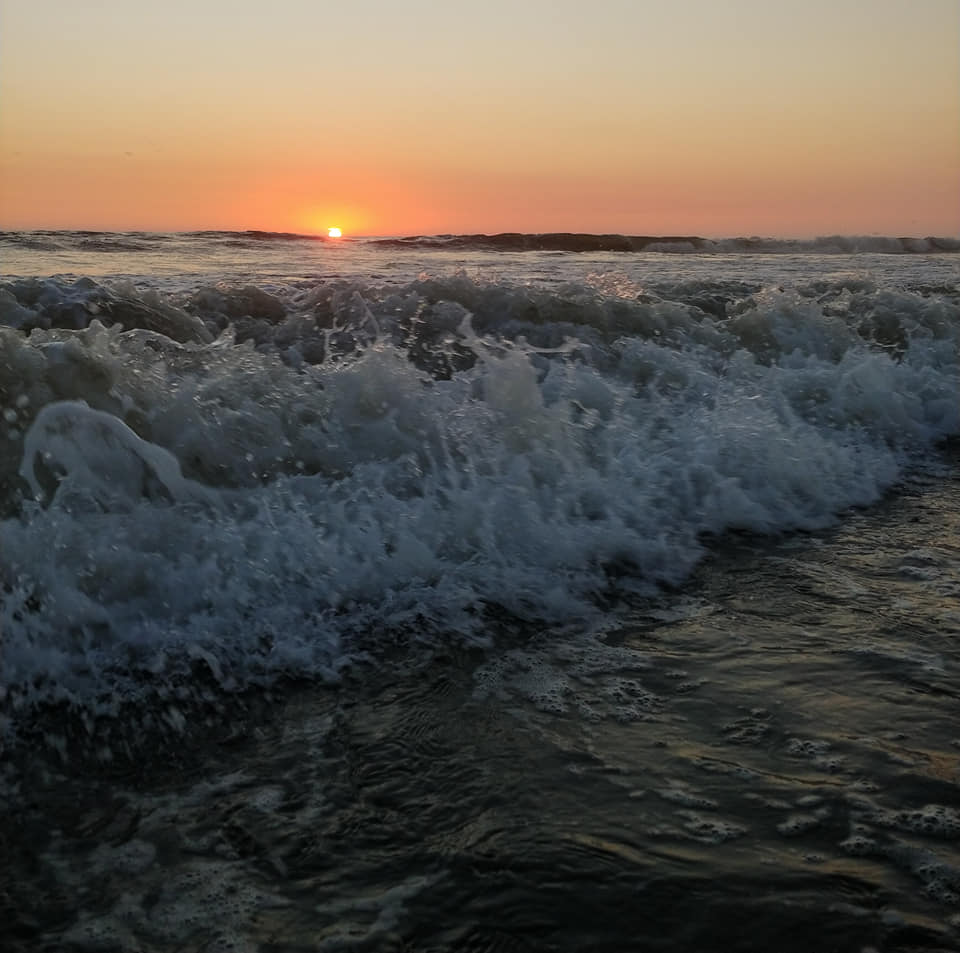 Perhaps you’ve heard of it. But unless you live in Washington or Oregon, you probably haven’t. Washington isn’t exactly known for its warm and lively coastline. Much of the Washington coast is almost the exact opposite of what many Americans would consider “beach life.” So naturally, people would look towards the destinations that are known for their beautiful beach sunsets and crashing waves. 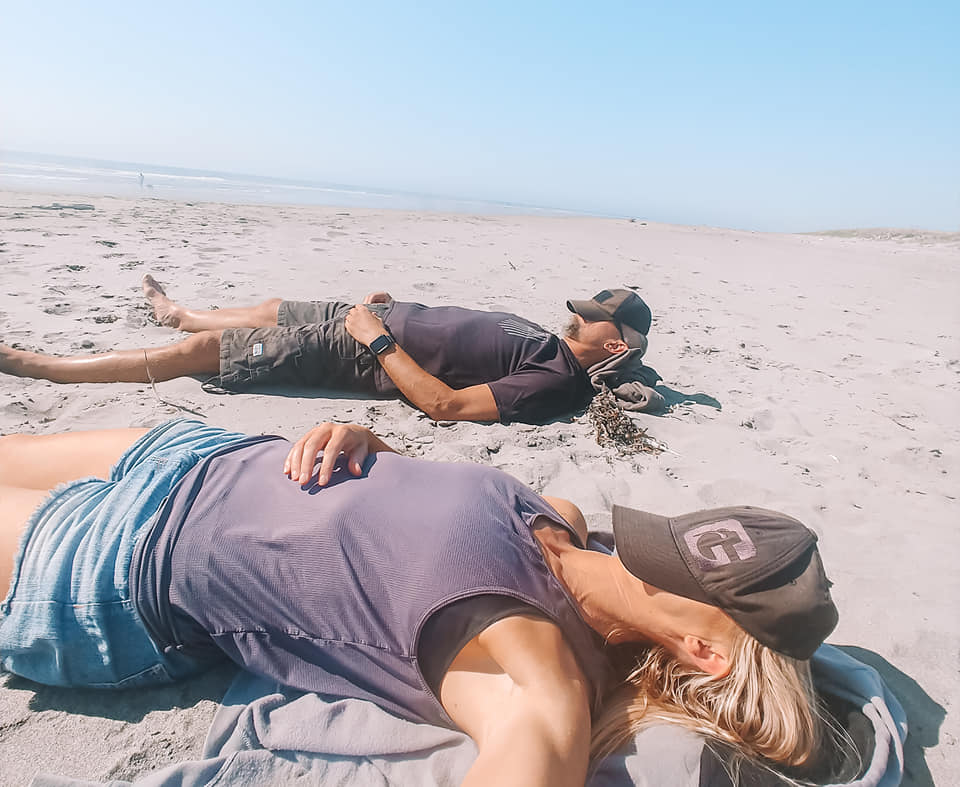 According to Weather Spark, Ocean Shores summers are cool and partly cloudy with winters being very cold, windy, wet and mostly cloudy. The temperature throughout the year varies from about 40 F to 65 F and rarely dips below 32 F or goes above 73 F. And the water? According to Surf Forecast, the temperature peaks in mid-August at around 57 to 63 F with a winter low of 45 to 50 F. Let me just translate that – if you are looking for a warm, sunny beach in the state of Washington, Alki Beach in West Seattle or Juanita Beach Park in Kirkland might be your best bets.

But if you are looking for beautiful scenery, a lot less people, and a laid back life with some peace and quiet (granted you would be willing to deal with the unpredictable weather) – then let me introduce you to your new vacation destination. 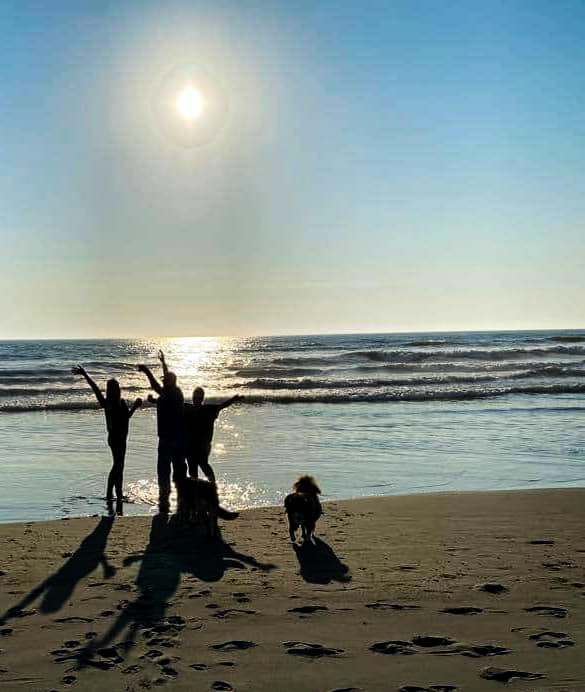 I recently spent almost five days staying at a home a friend of mine owns between Ocean Shores’ Oyhut Wildlife Recreation Area and the shoreline, and I cannot begin to describe how enchanting and transformative my mini-vacation was. Good Lord, in a COVID-world where I am blessed to telework, it was a MUCH NEEDED break!

Ocean Shores is approximately 133 miles (2.5 hours) west/southwest of Seattle. Driving there can be a bit frustrating, especially in the Tacoma/Olympia area when approaching JBLM – but really, when is that area not congested? But once you hit Aberdeen, Hoquiam, and the small towns dotting North Bay, you know you are almost to your small piece of peaceful paradise. The city of Ocean Shores itself is not a big metropolis, but it does give off the vacation destination with a small town vibe. I have visited Ocean Shores a few times in my now 8 years of living in the Pacific Northwest, but all were day trips, I had never stayed overnight until this trip. 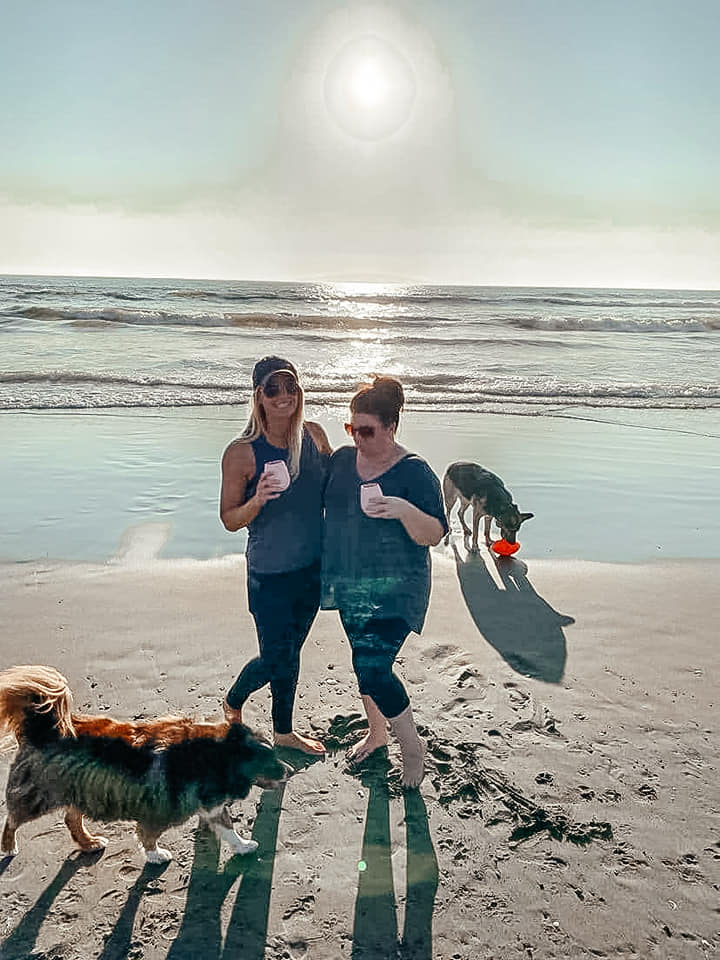 As mentioned before, a friend of mine owns a home towards the south end of Ocean Shores. While you cannot see the ocean from his house, you can hear the waves crashing from the porch and bedrooms. To get to the water, we were able to cross the street and walk through a field of tall grasses and bushes before the sand hit our toes. With my boyfriend, two very good friends and two dogs in tow, our extended weekend began – and it was GLORIOUS!!

Imagine building a beach bonfire with driftwood, bringing down a bbq grate from where you are staying to cook burgers over an open flame, watching deer eat some grass on the beach, the birds flying just above the water, the incredible sunsets, being with your friends and having almost the entire beach to yourself!?! Hello!!!!! 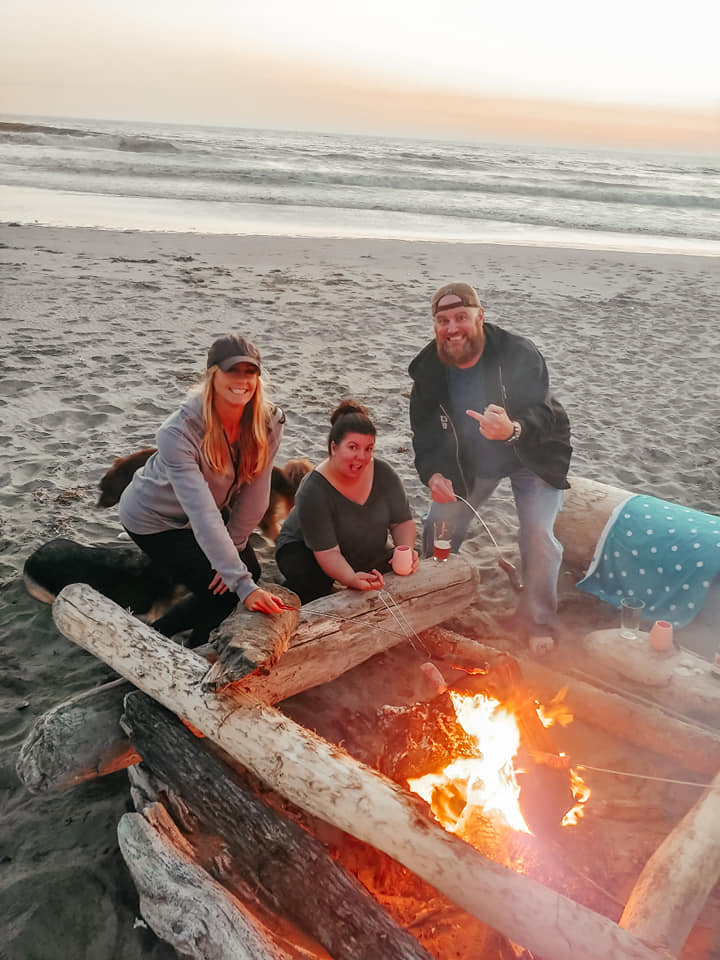 Yes, COVID is rampant right now (as of this writing) so that no doubt was a huge factor in the lack of humanity walking the shore. However, we did go up to Moclips, where you can drive onto the beach, for a couple hours one of the days we were there. I can tell you, there were definitely more people around at Moclips, but everyone stayed socially distant for the most part. Side note, we drove through Seabrook and hi – can I please stay there for an extended weekend as well? I had NO idea that little town was even there!! It was adorable and totally pulled me into its cuteness vortex. I have so many more vacations to plan. Clearly.

Back to Ocean Shores. How can I describe how peaceful my time was, building silly sand structures, frolicking through the very cold water in my shorts, catching some much needed sunshine and warmth and finding total zen? Literally, one of the most relaxing long weekends of my life.

We did other things besides chilling at the beach though. We tried some beers at Ocean Pours Taproom (they have a huge COVID-friendly outdoor seating area!) and I discovered that Belching Beaver Brewery makes not only one of the best Peanut Butter Milk Stouts I have ever had (anytime I see those bottles at a grocery store, it’s mine!), but they make a Viva La Beaver – a liquid chocolate stout treat loaded with notes of creamy peanut butter, cinnamon and coffee. That beer has won numerous awards, and with one sip, you can taste why. If any restaurant serves this, please tell me and I will be there in a heartbeat as a patron!

And then, I spent more money on two bottles of beer than I ever have in my life. At $26 per bottle (I bought two), my palette changed forever. I know this is a blog post about Ocean Shores, but holy shit you guys. Fort George Matryoshka Russian Imperial Stout? One aged in Woodinville Rye Whiskey barrels with Cocoa Nibs and the other aged in Westward Whiskey Barrels with Vanilla? Stick a fork in me, I’m done. 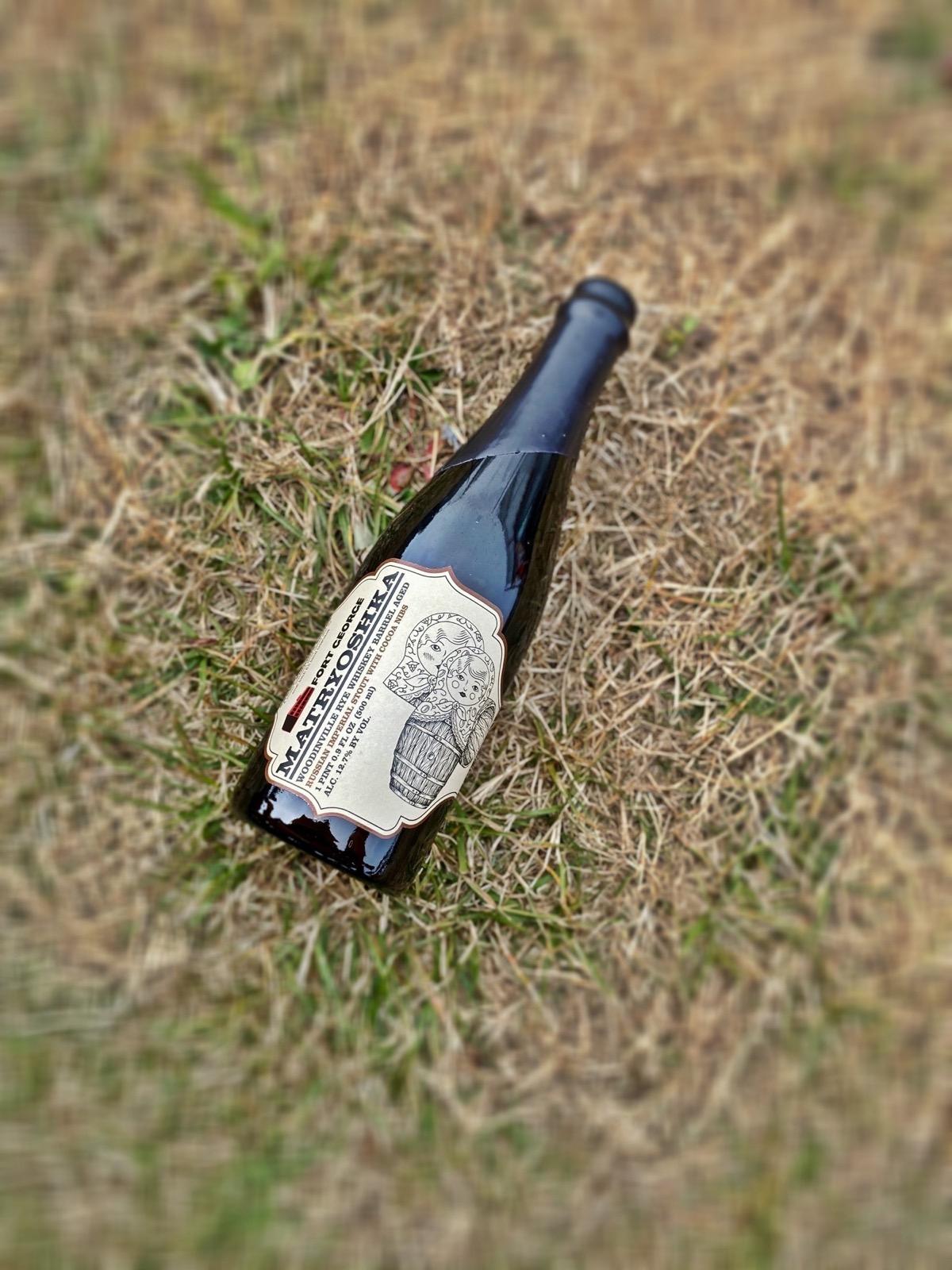 And if you’d like to try out an Ocean Shores eatery, I must suggest Dugan’s Pizza. We ordered for pick-up before a hockey game (because hockey is back baby and we love hockey #LetsGoCAPS, only we were watching the Oilers and Blackhawks playing this particular day) and the pizza was so good! We failed to take proper food photos, but one of us (not me) had a massive dairy allergy, so we ordered one large All-Meat Pizza without cheese and one large All-Meat Pizza with cheese. Muy bueno and perfect to go with our beers and to watch an afternoon hockey game before hitting the beach for an incredible sunset! 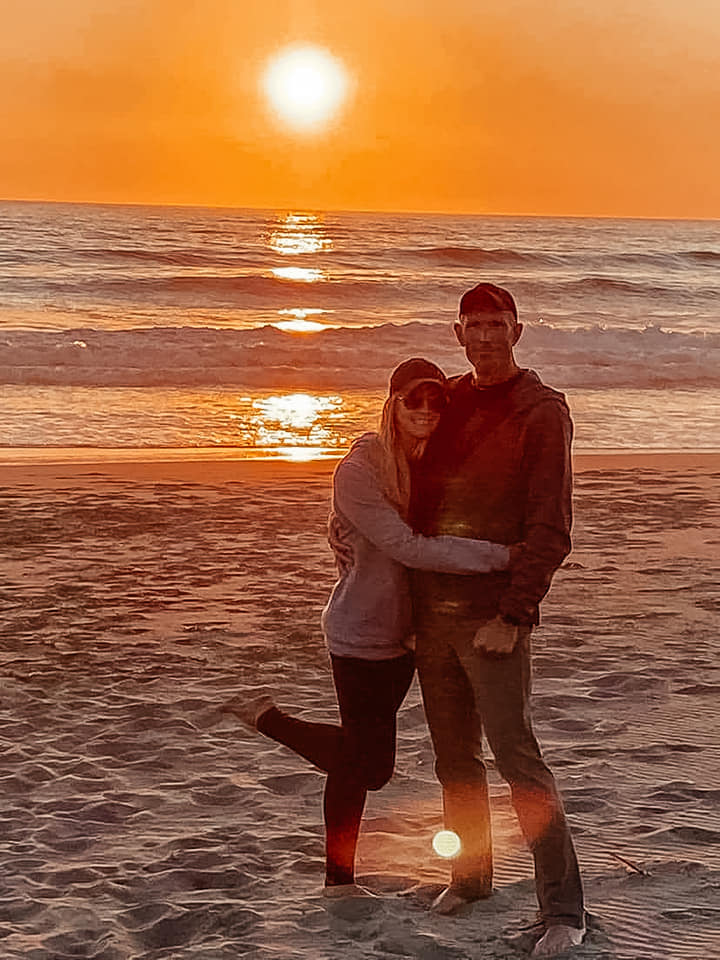 I highly HIGHLY HIGHLY recommend getting the hell out of town and hitting up Ocean Shores for a long weekend before summer ends, or even in the fall. Heck, anytime of of year, right? Yes the weather can be cold and gross – another friend of mine stayed at the same beach house we did one week prior, and it was cold, cloudy and windy the entire time they were there, so we were lucky indeed. But seriously, it’s the beach. It’s away from the big cities. It’s away from the hum drum, daily work environment. Even California beaches get cold and foggy sometimes.

I definitely plan to make my way down to Ocean Shores again and again in the future, and you should too!