“I was raised in Ellensburg just a few hours east of Seattle and my commitment to this region is personal and  long-lasting,” said Mina. “My first job was at the Space Needle before I went to culinary school, and to be able  to come back to my roots with the opening of RN74 in 2011 was so meaningful. We operated RN74 until the pandemic hit and I then saw an opportunity to reinvent the space to Bourbon Steak. I couldn’t be more thrilled  to bring a concept that I feel is very much in touch with the amazing people and warmth of Seattle.”

The kitchen will be helmed by Executive Chef Adam Reece, a Pacific Northwest native that has a deep connection  with regional ingredients. Most recently, Reece was on the opening culinary team for the Lotte Hotel Seattle as  Chef de Cuisine, leading the formation of Charlotte Restaurant and Lounge. At Bourbon Steak, he will ensure the  menu reflects and celebrates regional ingredients including local and sustainable produce, hormone-free meats,  and ethically-sourced seafood.

“I’m so thrilled to be working with Chef Adam,” said Mina. “His story is very similar to mine – he started at the  bottom and worked his way up in Washington. He’s equally passionate about the Pacific Northwest, its people, the products, and how to mentor and build an amazingly hospitable team.”

The heartbeat of the space will continue to be at the bar. With a commitment to a great beverage program,  Bourbon Steak Seattle will feature an extensive bar menu, including hand-crafted signature cocktails highlighting  spirits from local distilleries such as Westland Whiskey and others from around the world. The bar will also offer  a robust bar menu – and last not but least, a unique happy hour menu offered Tuesday to Friday, 4 to 6 p.m. featuring an exclusive and award-winning Bourbon Burger.

Alongside a selection of local and domestic beers, MINA Group Corporate Wine Director and Master Sommelier  Jeremy Shanker will offer a thoughtfully composed wine list with over 450 selections representing iconic vintners from the world’s most renowned wine-producing regions – with a special focus on Northwest wineries. Shanker  will also introduce an extensive by the glass program available in the bar and dining room.

Bourbon Steak will be located in the iconic Joshua Green Building at 1433 Fourth Avenue in downtown Seattle.  The space will seat 125 in the dining room, with an additional 20 seats at the bar, and offer a private dining room  with space for 16. Dinner reservations are now being accepted Tuesday to Thursday from 5 to 9 p.m., and Friday  and Saturday from 5 to 10 p.m. Reservations can be made here. 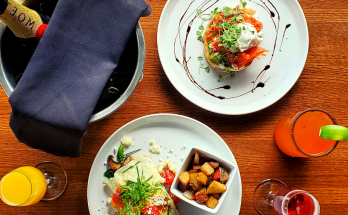 Five Places to Try in Texas for Restaurant Week 2022