Eighty-six selections from The Museum of Flight’s collection of rare, behind-the-scenes movies have been digitized for the first time and are now online. The films date from World War I to Apollo 13. Most of the films are privately shot footage and home movies that offer surprising views of local culture and aerospace history not available anywhere else. Highlights include home movies of flight attendants at work and leisure circa 1940; making and flying German fighters in 1918; Alaska bush flying the 1940s; Aerocar fun in 1968; and Bill Boeing partying with friends circa 1930.

The digitization was made possible through a Recordings at Risk grant from the Council on Information and Library Resources (CLIR) in 2020, and the grant program is made possible by funding from The Andrew W. Mellon Foundation.

The grant allowed the Museum to digitize a wide selection of 16mm, 8mm, and Super 8mm films from across 18 archival collections and make them accessible on the Museum’s Digital Collections site. All of the films are silent and under 15 minutes. Footage in the Collection also shows the Boeing XB-15, early model rocket launches, the recovery of Apollo 13, 1930s China, Camp Lewis aviation in the 1920s, and airline travel in the 1940s and 1950s.

The digitization project was led by the Museum’s Supervisory Archivist Nicole Davis and Digital Asset Coordinator Ali Lane. After sending the films out for digitization to a company specializing in film preservation, Archives Intern Arabella Matthews cataloged the films to make them widely accessible. Museum volunteers assisted with the identification of aircraft in the footage.

To conduct research using the Museum’s archival and library collections, researchers can make an appointment to come to the Museum’s Dahlberg Research Center or make other inquiries online at: 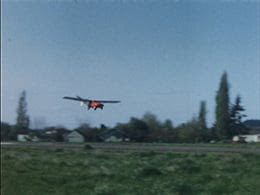 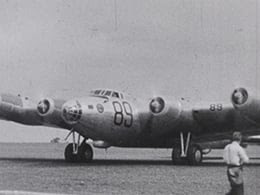 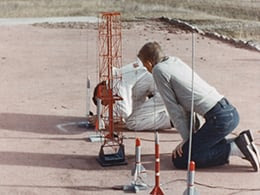 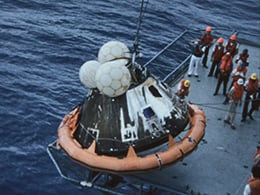 Screenshot from film footage of the recovery of the Apollo 13 Command Module (CM), April 17, 1970. The Michael Poirier Apollo 13 Recovery Collection/The Museum of Flight