Just over one week ago of this writing, I found myself standing in the cold darkness at Vandenberg Space Force Base in California. Being my first NASA launch with media credentials to my name, I had no idea what to expect when my best friend dropped me off at the Visitor’s Parking lot. Surrounded by camera crews and reporters from various news outlets, I felt out of place.

No doubt these space launch veterans knew what was expected. They knew the routine. I was, as I call myself, “just a blogger,” but now I was “just a blogger with NASA media credentials.” I sucked it up and introduced myself to a couple of guys standing near me. Lucky for me, two of them were also newbies with NASA media credentials and we bonded almost immediately for our love of all things space.

The Air Force Public Affairs Tech Sergeant who handed each of us our security clearance paperwork and mission patch had us all get on a bus and we made our way to the launch viewing site on base, OS-45. Sitting on the bus with my new friends for the night, one of the regular writers for Space.com eagerly asked us how we “got on the press bus.”

I told my quick story how I have always dreamed about working for NASA’s public affairs shop. I grew up near NASA facilities at Edwards AFB. With my blog, I started writing about my experiences while applying for media credentials to all the launches.  I would get denied every time, but I kept applying. One day, a very wise NASA employee told me to keep writing my space related stories, and so I did. And now, here I was, “just a blogger on a press bus,” going to watch a launch with other media.

Upon arrival to OS-45, it was dark and cold. We could see the launch pad glowing just off in the distance. Behind me was the John F. Kennedy Space Center Expendable Launch Vehicles trailer. I have to say, that was a term I had never heard before, but now I know it’s what they use for a vehicle that’s only being used once. 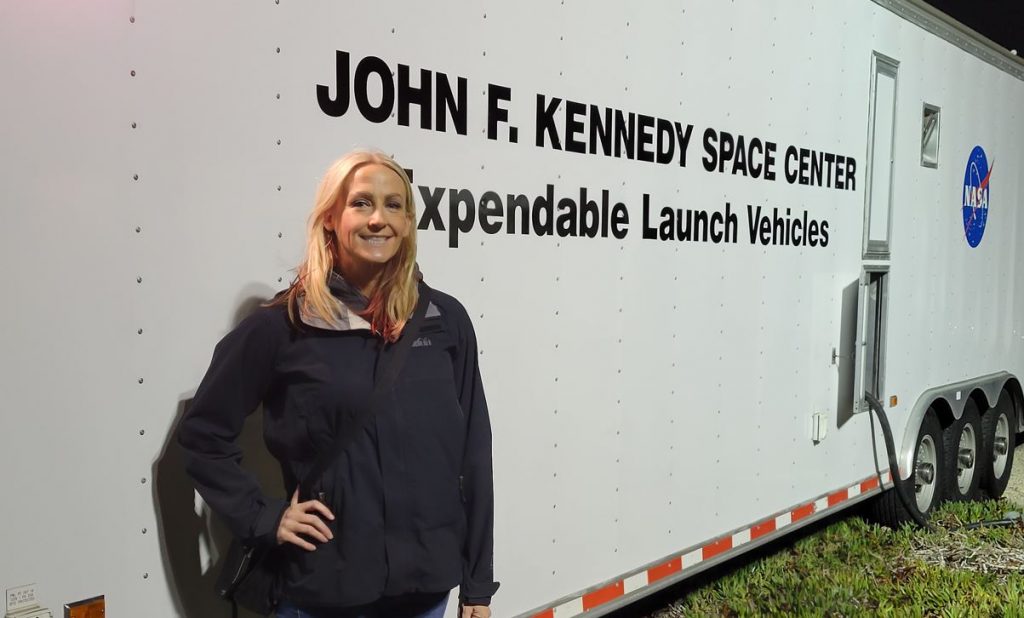 And for this launch, that was clearly the case, because I was there to witness the DART Mission launch!

The Double Asteroid Redirection Test (DART) is NASA’s first planetary defense test mission. DART was built and is managed by Johns Hopkins Applied Physics Laboratory in Laurel, Maryland. This particular mission, with “test” in it’s name, will impact an asteroid that is not a threat to our planet.

Some really cool facts about the DART mission:

While my fellow media and I waited for 10:21 p.m. PT, I had the chance to chat with Lt. Col. Lintker, Space Force Commander of the 18th Space Control Squadron. This squadron, located at Vandenberg, tracks all 37,000 man-made objects in Earth’s orbit.

They process and monitor all of the activity to, in and from space. This includes launch detection and tracking, conjunction assessment and collision avoidance, human spaceflight support, maneuver detection, breakup identification, and reentry assessment. They also share their data with not just NASA, but commercial, international and academic partners. You can check their data on space-track.org.

As launch time finally approached, we all took our spots with our eyes and cameras (and my cell phone) directed to the launch pad. Chills went through me as the voice in speaker began the countdown. I started my camera at 10 seconds. The countdown hit zero. The SpaceX Falcon 9 rocket lit up.

The ball of light blasted off into the sky. About 27 seconds after lift-off, I could hear the engine roar. And being that close, it was loud! The tingles and the chills you get are indescribable. I can only imagine what the Johns Hopkins APL folks thought, watching their project make its way into the heavens. All that work – the blood, sweat and tears – finally off the ground and into space.

At 11:17 p.m. PT, DART separated from the second stage of the rocket and about two hours later, the spacecraft’s 28-foot solar arrays rolled out. They will power the spacecraft and the Evolutionary Xenon Thruster – Commercial ion engine, one of the many technologies being tested on DART for future space missions.

Deployment confirmed, @NASA’s DART is on its way to redirect an asteroid pic.twitter.com/UTxkcJFcq0

The DART mission is just another example of how hard work and human ingenuity go hand-in-hand. For me personally, it was finally receiving my NASA media credentials and hoping to work for my dream agency one day so I can share the human element of spaceflight with the world.

For the Johns Hopkins and NASA employees who are working to protect our planet from the unknown universe – to watch something that started off as an idea, perhaps even a drawing on a piece of paper, and it’s now in space for a one-way mission….I can only imagine what an incredible accomplishment that must feel like.

And now, next stop – Dimorphos.

“If I could get one message to you it would be this: the future of this country and the welfare of the free world depends upon our success in space. There is no room in this country for any but a fully cooperative, urgently motivated all-out effort toward space leadership. No one person, no one company, no one government agency, has a monopoly on the competence, the missions, or the requirements for the space program.” – Lyndon Baines Johnson