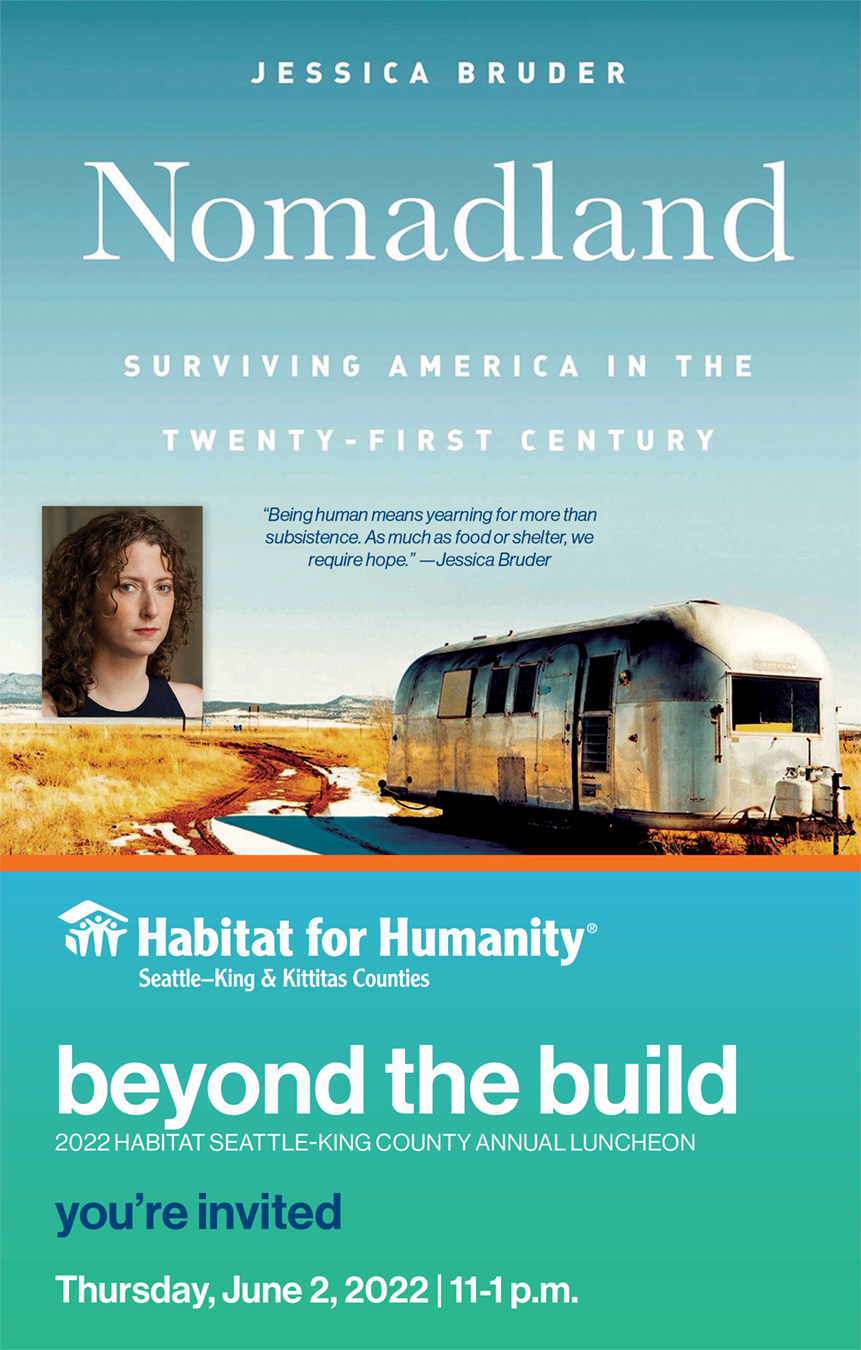 Habitat for Humanity Seattle–King & Kittitas Counties will bring its annual fundraising luncheon Beyond the Build back to the Washington State Convention Center on Thursday, June 2. Emceed by KIRO7 anchor Aaron Wright, the first in-person event in two years will feature a keynote by Jessica Bruder, award-winning author of Nomadland: Surviving America in the Twenty-First Century, which was turned into an Oscar-winning feature film.

During the luncheon, Habitat will celebrate its work and communicate the need for support to continue its important mission and ambitious agenda to provide solutions to the Puget Sound region’s affordable housing and homeless crisis. Attendees donating $1,000 or more will gain entrance to an exclusive live VIP reception with Ms. Bruder.

Habitat will honor Bank of America with its Community Leader of the Year award. The Bank of America partnership with Habitat SKC has spanned 25 years and incorporates engagement of its employees with significant financial support. As a long-standing partner, Bank of America has contributed grant funding for a variety of Habitat projects and critical repairs and provided employee volunteer hours supporting Habitat’s vision that everyone should have a decent and affordable place to live.

Through direct action and investment, Bank of America is focused on creating opportunities in the areas of health, jobs training, small business support and affordable housing, as these areas are where systemic, long-term gaps have existed and where significant change is required to achieve sustainable progress. The award will be accepted by Kerri Schroeder, President, Bank of America Seattle Market.

Bank of America enjoys a long-standing relationship with Habitat for Humanity International. Sprung from the early years of Habitat’s Jimmy & Rosalynn Carter Work Project — whose third year was hosted in Charlotte, Bank of America’s headquarters — the partnership has continued to grow, totaling $75 million of support for Habitat’s work around the world, with more than $55 million in cash and property donations to Habitat for Humanity International.

Habitat’s Volunteer of the Year

Steve Hill will receive Habitat’s Volunteer of the Year award for serving as leader of the Weyerhaeuser Alumni Campaign. Steve led a group of eight retired Weyerhaeuser Company executives on a campaign to sponsor a “Habitat House a Year.” The campaign resulted in pledges from 94 former colleagues who committed $1.18 million over five years to two Habitat affiliates. These funds will sponsor ten houses over five years.

Said Brett D’Antonio, CEO, Habitat for Humanity Seattle–King County, “We are excited by the wonderful program we have developed this year, and insight we will gain from Jessica Bruder’s participation. We have much to celebrate, but also much to do and are grateful for and committed to ensuring that all funds raised are put toward the best possible use during these challenging times.”

To register, visit: Beyond the Build Luncheon Habitat SKC