Summer officially began this week, and you know what that means: Cancer season is among us. As we close out Gemini season and as Mercury leaves retrograde, it’s time to find a beer that embraces our new astrological phase.

Elysian recently unveiled a label refresh for one of its OG beers, which was first brewed over 25 years ago. As one of their longest standing beers, Immortal’s original label was inspired by Greek mythology, showcasing Zeus sitting defiantly on his throne as he harnesses heaven’s lightning into a vibrant scepter of power and fire. 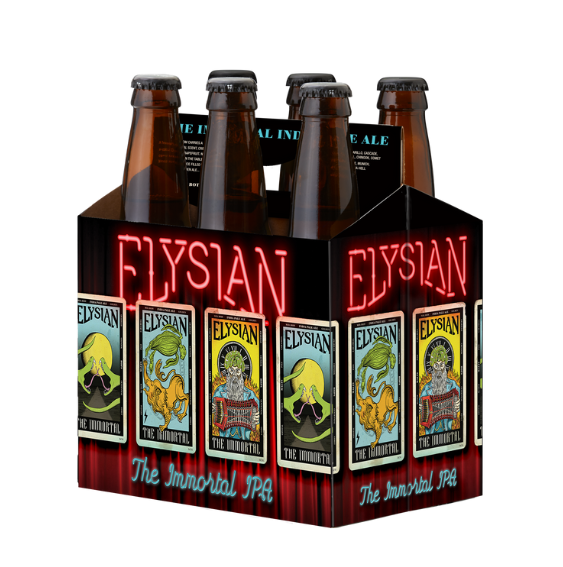 Seeking to maintain a connection to the beer’s original roots, Elysian’s design team approached the Immortal refresh by looking at the original tagline ‘Power in Balance’ as a jumping-off point for new art. They had attempted to refresh the brand several times over the past few years, but nothing really clicked until this original narrative was introduced into a tarot framework – an idea that was first sparked last year.

To further build upon this framework, each of the designers were enrolled in a tarot class and the synchronicity helped to inform and illuminate this direction they’d ultimately charted. Individually, each designer created a tarot card that represents a different part of Immortality. Together all three cards tell an interconnected story, but individually represent a different part of Immortality:

With this in mind, the design team looked at 6-packs of the beer as a deck of tarot cards. These cards/labels are also featured on the carrier and encircle the pack as an infinite symbol, which further emphasizes the immortal concept. Hidden underneath the carrier is a card reader’s hand pulling a card for the consumer that coalesces the overall narrative and sets a tone for the beer, finishing with the phrase, “Immortal Never Dies.”

The in-house design team is constantly pushing the boundaries and exploring how they can drive excitement and inspiration through label design. With this refresh, Elysian has worked to breed innovation, but also retain Immortal as a strong legacy with a look and feel that matches the current brand ethos and honors the roots of its beginnings.

Guide on How To Write A Dissertation Abstract